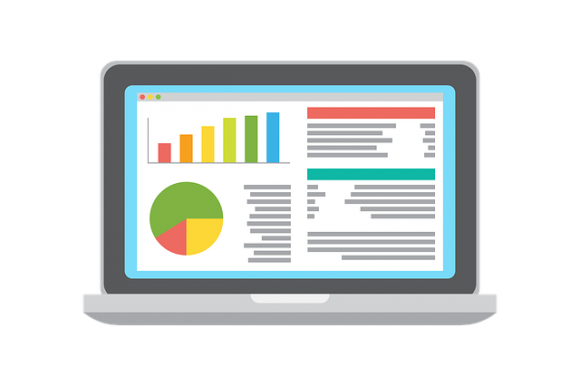 Introduction
This report has been prepared to show the comparison of the financial performance of Tesco Plc. and Sainsbury Plc., over a five year period. The ratios that have been chosen to show the financial analysis of both the company are as profitability, efficiency and liquidity over a five year period. Both the companies are operating in UK and deals in grocery products under the head of supermarkets. According to the financial report of both the companies it has been found that Tesco holds more than 29% of the market share and holds the top place in the grocery market whereas Sainsbury hold 17% of the market share holding the third place in the industry. Besides grocery business both the companies deals in other kinds of business starting from clothing to financial services. According to the reports published by Morning Star (2018), Tesco has earned a revenue of $57,491 billion whereas Sainsbury’s total revenue stands at $28, 456 billion in the year 2018. 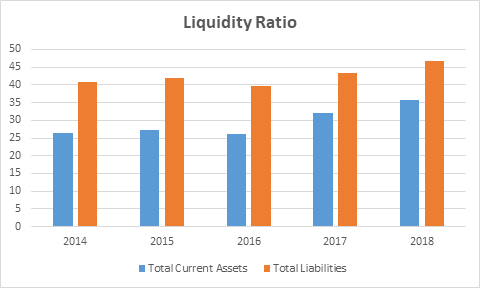 To determine the profitability ratio of a firm Earnings per Share must be considered. Earnings per Share is used to measure the earnings from each unit of share. This helps the shareholder to calculate and determine the earnings available from each unit of share purchased by them and when this is compared to actual dividend received by the shareholders will give them the payout ratio of the firm (Boyas and Teeter 2017). This is very important for the shareholders of the company as profits are used either for investment in capital expenditure or for the purpose of paying off its dividends. Therefore, if the dividends are low then either the shareholders or the investors may expect that profits of the company has been used to meet its capital expenditure which is a good sign for the shareholders as it will increase the future value of the company and lead to capital gains (Barman and Sengupta 2017). 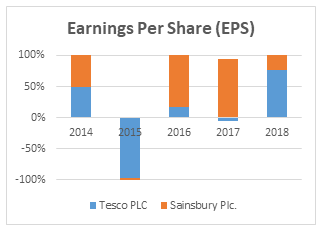 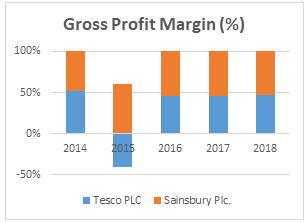 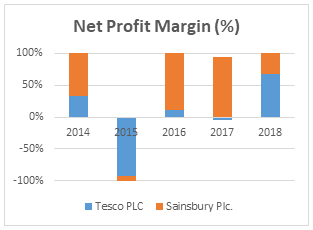 Comparative Analysis
Going through the graphical representation of both the company’s Earning per Share it seems that Sainsbury has a better position as compared to Tesco. Tesco does not have a consistency over its earning per share whereas Sainsbury’s earning per share is positive as compared to Tesco’s. The average of Gross Profit Margin is higher in case of Sainsbury than Tesco. Shareholders of Sainsbury Plc. will have a positive reaction on the production efficiency of the company than that of Tesco. Tesco has a average gross profit margin of 3.84% whereas Sainsbury has an average of 5.98%. The Net Profit Margin of Tesco is very poor as compared to Sainsbury. The average of last five years data shows that the net profit margin of Tesco is negative with -1.08% whereas Sainsbury has 1.31%. Comparing overall figures of both the companies it can be said that Sainsbury is doing well than that of Tesco (Financials.morningstar.com. 2018).

Efficiency ratio
Efficiency ratio analysis helps in determining the efficiency of the company in using its liabilities or assets in the generation of revenue for the company’s business. Such ratio can be determined by comparing the Inventory Turnover ratio with other companies present in the industry (Brigham et al. 2016).

Tesco’s Efficiency Ratio
As per the graphical representation made above in the figure, it shows that Tesco’s performance in inventory turnover has decreased which means that Tesco is taking much more time to reduce or clear its stocks. Tesco takes an average of 20.2 days’ time to clear its stocks which is much more as compared to its competitors in the market (Financials.morningstar.com. 2018).

Sainsbury’s Efficiency Ratio
As the given data in the figure above, it shows that Sainsbury’s performance has improved over the last four years. In the last four years the company’s turnover ratio was very low as compared to its competitors but in the recent year it has done well and has come to an average of 20 days (Financials.morningstar.com. 2018).

Conclusion
On the basis of comparative analysis made above it shows that Sainsbury will be a favorable choice for the investors. The financial ratio analysis has been derived from the annual report published by the company and has proved to be a valuable tool for the investors. Therefore, from the comparative analysis of the financial performance of both the companies over a period of five years, it is clear that Sainsbury has accelerated its growth while Tesco’s performance is not good. However, by analyzing the financial performance of the company’s the investors can just assume but cannot confirm the future performance of the companies. Sainsbury is leading the growth in the grocery market while Tesco’s is proving to be more efficient than its competitors. Tesco is considered to be the leader in the grocery market. However, the performance of Tesco is relatively poor in terms of the efficiency and profit margins it has earned over period of five years as compared to Sainsbury.

Therefore in conclusion, it can be summarized that through the analysis of the ratios of both Tesco Plc. and Sainsbury Plc. from the year 2014 to 2018, it can be said that Tesco’s performance is not at all satisfactory. The grocery business of Tesco is growing very slowly as compared to its competitor Sainsbury. However, analyzing through numbers of the previous years it can be said that Tesco has a strong potential to grow in this sector. Therefore, Tesco should improve its performance in the future operations.